May well be the response from multi-generations of people not born between the years of 1946 to 1964 who reside in many of the single-family homes in Vancouver, to the radical proposal from the City of Vancouver’s HUGE DENSITY BOOST. There is no question that Vancouver is unaffordable to a phenomenal amount of people. According to the latest Demographia survey, Vancouver has the second least affordable housing in the world. The ramifications of this is certainly being felt by many Vancouver employers who are unable to offer salaries that make it viable to reside in such an unaffordable city.

Not only is the housing cost unaffordable, the rental situation is even more dire! According to Canadian Mortgage and Housing Corporation, the vacancy rate in Vancouver is less than 1%. In conjunction, Vancouver has the highest rents in Canada according to Rental.ca’s August 2019 National Rent Rankings Report. The average monthly rent for a two-bedroom apartment in Vancouver $3,049, while a one bedroom averages$2,208!

The City of Vancouver is attempting to propose a solution to fix it. According to November 22, 2019 Vancouver Sun, “many side streets dominated by detached houses in residential neighbourhoods throughout Vancouver would soon be opened up to four-storey apartment buildings.” A 236-page report from the City of Vancouver staff will be considered next week contemplating making it easier to construct six-story buildings on main streets and allowing four-story rental townhouses or apartment buildings in low density transition areas. This is defined as residential blocks within 150 metres or 450 feet of an arterial (or busy) street. 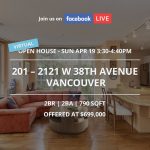